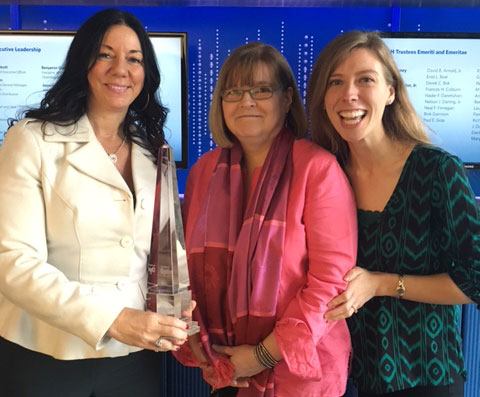 LAWRENCE, MA – Imajine That is honored to be named Workforce Magazine’s Optimas Gold Winner for its partnership with WGBH.

“We are so excited to be acknowledged for such a profound collaboration investing both in the community and our employees!” said Susan Leger-Ferraro founder and CEO of Imajine That.

The Boston-area children’s museum, which serves child ren from chronically at-risk families, partnered with local public television station WGBH-TV on the Ready to Learn initiative. The initiative was designed to help adults learn how to use technology and media that, in turn, would help them teach children skills in science, technology, engineering and math, or STEM.

Partnering with WGBH allowed the museum’s staff of “imajinators” to be trained and be able to pick the brains of the WGBH employees who came to train them on the technology. As staff members became more proficient with the technology, they were able to pass those skills and knowledge on to parents, teachers and students in the community. It was a win for the employees — and the next-generation workers.

To accomplish its goals of training children, Imajine That had to get creative. In its Optimas application, Imajine That explained, “Most at-risk families feel intimidated to take courses and training in a formal environment due to their English as a second language reality.” Ready to Learn consisted of events and experiences that took a fun and playful approach to help kids learn STEM skills.

Over a two-year period, more than 40 teachers and staff were trained as part of the program, and the museum was able to acquire new technology under the partnership, such as tablets, computers and software. The initiative seems to be working, too. Some families, the museum reports, have even requested STEM-related birthday parties. If that isn’t the icing on the cake of how deserving Imajine That is for this award, we don’t what is.  For its initiative to join forces with WGBH to create a training initiative for its staff and the community, Imajine That is the gold 2015 Optimas Award winner for Partnership.

Workforce Magazine, published by Human Capital Media, announced the winners of the 2015 Optimas Awards. The awards program, which celebrates its 25th anniversary this year, recognizes companies that are achieving measurable business outcomes through visionary and impactful human resources initiatives.

“Throughout the 25 years of these awards, we’ve seen companies place increasing importance on human resources initiatives, realizing the potential a strong HR department can have on business growth,” said Rick Bell, managing editor of Workforce Magazine at Human Capital Media.

HCM leverages its award-winning editorial content with innovative integrated media products, including targeted newsletters, webinars, interactive websites, special print and online supplements, resource guides, industry research and benchmarking, a vendor directory, as well as live and online conferences that bring together international audiences to network and discuss leading-edge strategy and best practices in the industry. HCM partners with recognized industry experts to provide thought-provoking feature articles, news, opinions and insights through its award-winning publications, events and e-media and give human capital professionals the business intelligence and knowledge they need to succeed in new and changing markets.

About Imajine That
Imajine That is passionate about growing children, families and educators — as well as the best possible ecosystems for this growth. Imajine That operates an innovative, interactive children’s museum and early childhood programs, via Imajine That University in Lawrence. In addition, Imajine That provides extended learning after school programming to 12 classrooms in the Boston Public Schools.

← Imajine That Among Inner City 100 Winners 100 fastest-growing inner city companies, as ranked by the Initiative for a Competitive Inner City