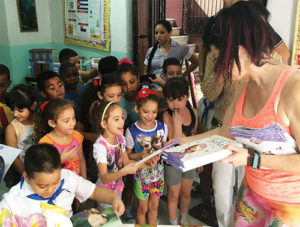 Susan Leger Ferraro distributes books to children as part of a partnership with Sergio Luis Ferriol Rios Elementary school in Old Havana, Cuba. Books were donated in partnership with First Book in Washington D.C. and Yanitzia Canetti, a Cuban author and publisher.

Humanitarian, CEO, pioneer, teacher, leadership guru — all these words describe Susan Leger Ferraro, a serial social entrepreneur who has worked to make lives better for thousands of Boston area families and children. She has created several successful businesses, all with a core goal of shared prosperity.

Leger Ferraro was 17 when she opened Little Sprouts, an early education center for at-risk communities. Attending college in the evening, she became the first person under 18 to be licensed in Massachusetts to run a family day care center.

Eventually she would grow Little Sprouts into a $12.5 million business with 500 employees, but at its start in 1982, the center could accommodate only six children at a time. She was ready to grow the business, but was constrained by lack of space in her two-bedroom apartment. So she made her first real estate investment. She found the perfect house, but needed a loan to help finance it. “Mr. Jim,” the president of the Community Savings Bank in Lawrence, was honest with her. “You need to invest in the house,” he told her, “because otherwise it’s not possible for us to give you a loan. You should upgrade it, replace windows or carpet, paint it. Then it will be worth our investment.”

Leger Ferraro made a bold move. On a Saturday, she commandeered her family and friends, and together they painted the house she wanted to buy. On Monday morning at 8 a.m., she was waiting for Mr. Jim on the curb outside of the bank. The result: she got a $55,000 loan, which helped her expand Little Sprouts, which would grow to become an award-winning business. Two years later she sold the property and made a 110 percent profit.

In many ways, Leger Ferraro was ahead of her time in her early education practice. She believed children would benefit from being in nature, close to a farm, and Little Sprouts operated with an anti-bias philosophy, respecting the rights of all of the children. Holidays were celebrated only if parents came in to share how their culture celebrates them. Leger Ferraro says she did not want children to feel left out if the Easter bunny did not show up at their house. Parental engagement was a key part of the success of the business. 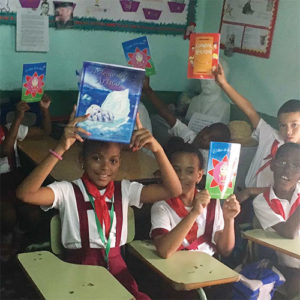 In 2005, she founded Imajine That, an interactive educational children’s museum in Lawrence, Massachusetts, to help close the achievement gap between disadvantaged children and their peers in neighborhoods with greater resources. While Little Sprouts was helping at-risk children, by third grade these advances were no longer visible. Data from a longitudinal study at Harvard showed two factors that led to the erosion of these benefits: first was teacher alignment after children left Little Sprouts, and second was the lack of family engagement. Leger Ferraro realized that parents — many of whom were working full-time — did not have the capacity to engage with their children in meaningful activities after a full day of work. This brought an “aha moment” as she realized, “It’s the grownups, not the kids.” Some of the wounded behavior exhibited by kids was due to the fact that parents had not healed their own childhood traumas. So how could she help the grown-ups self-actualize and become parents who could be there for their children?

Located in an old mill building converted with the help of Whole Foods and WGBH, Imajine That provides a place for children to play and engage with parents. “Imajinators” work side-by-side with families, suggesting age-appropriate model activities. The 12,000-square-foot space provides children with rich and creative experiences, including programming robots. Imajine That has expanded to offer programming for children in area public schools. The initiative began with 14 community families and has expanded to engage over 500 children.

Leger Ferraro, known as the company’s “Chief Curiosity Officer,” is proud to have Imajine That designated as a B Corp, indicating the company has met rigorous social and environmental criteria. This past September, Imajine That was honored at the B Corporation Best For the World celebration, scoring in the top 10 percent among B corps around the world in Community, Customer, and Overall Impact.

In 2008, Leger Ferraro sold Little Sprouts, though she continued to run it until 2012. This ushered in the first phase in her life in which she had bosses. Sensing that she had made a mistake in selling, she tried to buy the company back, but failed. Ever the optimist, today she credits the sale of Little Sprouts with her ability to launch G3, her new leadership development, consulting and training company.

Leger Ferraro created G3 with $40 million in workforce training and development funding. She tapped into state funds that allow for $2,000 to $3,000 per employee to help them access innovation. The name G3 stands for Golden Goose Group, as few employers know they have access to state revenue for such employee training. G3 has raised $124,000 for Boloco, helping the Boston-based regional “globally inspired burrito” chain to write grants for training entry-level employees in marketing, strategy leadership and more. 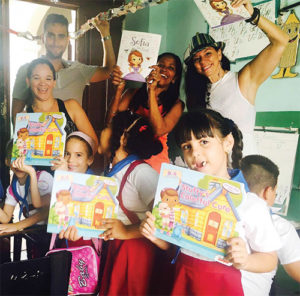 Working with well-known experts like Deepak Chopra and Dr. Rudolph Tanzi from Massachusetts General Hospital, she has impacted the lives of thousands of people, developing training programs to teach business people integrated or transformational leadership. Her goal, she says, is to help people to live an “extraordinary life” that integrates the personal and the professional. G3 workshops integrate cognitive science, behavior economics, conscious leadership and the science around well-being.

Leger Ferraro has expanded the G3 model nationally, supporting organizations in designing and funding organizational development with the aim of co-creating a world that works for everyone.

“We’ve let business off the hook for a long time, and that needs to change,” she says. “We need to make work ‘centers of well-being.’” One of the key tenets of the training G3 provides is “authentic communication, which links love, truth and courage with consideration,” Leger Ferraro says. Through G3, she helps people within companies address conflict with courage and humility. There is so much demand for the training that she has even had to pull back.

Another business founded by the ambitious entrepreneur is Peace, Love and Happiness Real Estate. She has hosted people from over 27 countries on her waterfront property, Serendipity Beach Retreat at Salisbury Beach, Massachusetts.

“Real estate has become communal,” Leger Ferraro says, and she considers her asset a shared property.

When asked if she has faced sexism in her rise as an entrepreneur, Leger Ferraro is candid that while it has happened, it’s not something she dwells on.

“I was treated differently because I am a woman,” she says, “but I didn’t allow myself to take it personally. It would have distracted me. I don’t let it become part of my story.”

Leger Ferraro is a mother of three grown sons. Her eldest is an adopted foster child from Jamaica. She recently became a grandmother to Giavanna, born on Leger Ferraro’s 50th birthday.

Passionate about travel, she has been to Cuba six times in the past year. There, she is investing in real estate and also working to make a difference. She brought more than 1,000 books and soccer balls to Cuba and created a pen pal program between a school in Old Havana and UP Academy in Dorchester, in partnership with First Book.

The ambition to chart her own course will always be a key facet of Leger Ferraro’s outlook.